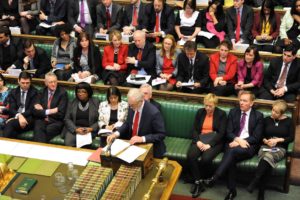 Summary: Brexit is not a party political issue. The increasing pressures on Labour to come out against Brexit must be resisted. Labour must get into power. A second referendum, becoming increasingly likely with Nigel Farage supporting it, is the only way it could be reversed if our democracy is going to retain any element of respect. All Labour need to do is to say they will bide by the outcome of whatever referendum result stands. They need to concentrate on gaining power not by risking their fragile majority. They have the policies and an energetic and enthusiastic party base. Even if Brexit does come to pass, one managed by Labour would be so much better for the country as a whole.

Brexit is not a party political issue. That may seem a strange thing to say. Yes, referendum was a consequence of political machinations at that time and, yes, the Brexit negotiations are being handled, albeit badly, by politicians. The conventional political party lines were crossed by very many voters because the political parties provided little helpful guidance. The vote to Leave was not driven by one party or another.

The campaign before the referendum was deeply flawed but the result was one arrived at democratically. Let there be no doubt that the only way respect for democracy can be maintained is if a second referendum is held, hopefully with much more detail of what the Deal might be. No political party could possibly reverse Brexit if they came to power without the support of a second referendum. It would be seen as a further example of the power of the establishment to try to reverse Brexit without it.

Labour are being advised by many to come out against Brexit. For many months, Labour has consistently avoided stating what their view of Brexit actually is. However the most important thing that Labour has to achieve is to become the next government with a reasonable majority. Nothing, including Brexit, should be allowed to distract from that goal. So far Labour have managed sitting on the fence. As soon as they declare one way or the other significant numbers of voters would leave the Party and no doubt others would join.

The demographics of Remain or Leave voters are complicated and transcend conventional party political lines. It is difficult to see what benefit there might be for Labour in declaring one way or the other for Brexit. A second referendum is becoming increasingly likely particularly as Nigel Farage has come out today in support of such a referendum. He is convinced that the majority for Leave would increase. In a sense any second referendum, no matter what the result, would be progress as it might give a bigger majority for one side or the other. That would perhaps clear up the ambiguities for a considerable period.

The Brexit battles will continue but there is no particular need for these arguments to affect Labour’s policies. Indeed there are relatively few of their policies that would be dramatically affected by Leaving or Remaining, apart from the economic impacts of leaving which would be pretty serious. Those in favour of Remaining should organise themselves as best they can independent of party loyalties and let the parties get on with politics and running the country.

At present, the Tories are so preoccupied with every aspect of Brexit that they have little energy left over to run the country. The current shambles with the NHS, social care, education, defence, you name it, is all because the Tories have run out of new ideas and, because of Brexit, do not want to upset anyone. This is exactly the environment that Labour should be capitalising on now. Labour have strong policies which are in many cases well worked out. These really should appeal to those living in areas that voted strongly for Leave. Nothing should be done to risk losing these potential voters. Labour have to manage an important communications program to reach the communities most affected by austerity. But don’t talk about Brexit!

All that Labour need to do as far as Brexit is concerned is to make it clear that they wish to support the democratic will of the people. If their democratic will is found to have changed after a second referendum, well that’s fine. And if it hasn’t changed we just have to live with it sadly. Those like me who want to Remain must make the case clearly and in a way that reaches those who had voted to Leave but we must not conflate Brexit arguments with Labour party policy, nor should we pretend that Labour strongly support one side or the other. If we do then Labour will simply lose votes. Opinion polls do not suggest a very strong lead for Labour. We must not become complacent and take risks. Only one thing matters. Getting Labour into power. Brexit can sort itself out.

Owen Jones in his recent piece for the Guardian (see: https://www.theguardian.com/commentisfree/2018/jan/03/stop-brexit-campaign-vote-leave-populist) has made the matter unnecessarily complicated by failing to separate Brexit from day-to-day party politics. That is why the strongly anti-Brexit Lib Dems have garnered almost no additional support by their policy. He is right, however, that a Labour-managed Brexit would be preferable to one being run by the hard right of the Tory party. That can only be done if Labour win power. Nothing else will do.