admin
Wednesday, 11 October 2017 / Published in Uncategorized
The Wheels Are Coming off! 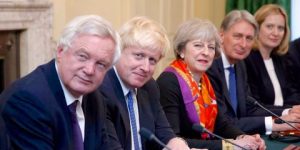 Summary: The Tory party seem to be in advanced state of chaos. Theresa May can barely hold the Cabinet together. Increasingly senior people in business and government are realising that the worst predictions of the Remain campaign are coming true. Our economy is in a dreadful state now, growing more slowly than all but one G20 country. Normal government in the UK has virtually ceased. Decisions that should be being made are left to flounder and be ignored by the civil servants preoccupied with the Brexit negotiations. The DUP are under extreme pressure within Northern Ireland to sort out the Bombardier problem with 4000 jobs under threat. The Northern Ireland border with the South is still a major problem and the DUP have not been able to find a satisfactory solution with their Tory masters.

Everything seems to be going wrong for Theresa May. We won’t dwell on her disastrous speech at the Conservative party conference. Unfortunately the content of the speech was very thin and said little about what she would actually do both domestically and about Brexit.

She now has major problems both with the Brexit negotiations which are clearly deadlocked. She cannot risk bringing the Brexit Bill back to the Commons because of the number of Tories supporting seriously critical amendments, virtually guaranteeing defeat if not changed.

Grant Schapps may have been seen off but the speculation about Theresa May’s future is, if anything, gathering pace. Increasingly senior politicians in the UK are agreeing with George Osborne who said “If the British government wanted to withdraw its application to leave the EU I think it would be accepted across Europe”.

What is also becoming clear is that all the dire predictions of the Remain campaign about economic disaster are becoming true, though much later than predicted. Growth in the UK is the now the second lowest of any country in the G 20. Inflation is rising and productivity remains flat.

Companies increasingly are reporting serious problems recruiting. Many are realising that hard Brexit and the consequences for the movement of goods between the UK and Europe will be catastrophic. There are also now reports of European countries preferring to source important supplies from other parts of the EU rather than relying on the uncertainties of dealing with the UK.

There has been a noticeable whiff of the decay of her premiership that became stronger yesterday evening. She was interviewed on LBC and avoided a straight answer on the question “would you vote for Brexit if the EU referendum was held now”. She refused to say. Other cabinet members are much clearer. Damien Green’s answer to the same question was that he would again have voted Remain as he did last time.

Jeremy Hunt has announced the ending of the public service pay cap. He then went on to make it clear that there wouldn’t actually be any more money for the NHS. Any pay increase would have to be funded from cuts elsewhere. This wonderful announcement has, like most other Tory promises, turned to dust.

The inevitable winding down of the Eurofighter production line at BAE has been greeted with a great deal of concern for the future of the 2000 employees who will lose their jobs. Much less concern has been expressed about the 4000 employees whose jobs are at serious risk with Bombardier. They make the wings for an aircraft being assembled in Canada which is now subject to 300% tariffs for sales into the US.

The factory that builds the wings is in the heart of DUP territory, yet Theresa May seems to be able to do nothing to help. The close relationship with the US that will help nurture an exciting and promising trade deal following Brexit is not looking very strong. This is worsened by Boris Johnson’s (entirely reasonable) criticism of the US administration’s threats to abandon the Iranian nuclear treaty signed by many countries including China, the UK, Russia and others. The DUP will soon start wondering whether a Labour government might be more productive for the future of Northern Ireland. Certainly the Tories are not cutting it!

It is the support of the DUP that is critical to the Tory majority in parliament. This is the time surely for Labour to use their influence on the unions in Belfast to put the squeeze on the DUP. The £1 billion promised has yet to materialise and already there is a concern that it may never do so. In addition, the DUP have come out in favour of a hard border between North and South, something that is very unpopular within Northern Ireland.

Even Tory MPs are rebelling against the speed of the Universal Credit introduction and in particular against the six-week wait before money is actually paid to benefit recipients.

Philip Hammond’s reluctance to fund anything to do with the “no-deal” Brexit has further emphasised the drift of the Cabinet away from hard-core Brexit. The majority now favour a more nuanced, gradual Brexit with a nice long transition period where everything pretty well goes on as before. Including the European Court of Justice.

Now there is increasing evidence that the three Brexiteers (Boris Johnson, David Davis and Liam Fox) have been doing a fairly dreadful job in negotiating Brexit. There are even suggestions that they want the negotiations to fail so that a hard Brexit becomes the only option. Increasingly, however, demands for a second referendum if a parliament vote goes against the deal arranged are becoming stronger. Concerns about the EU are widespread but concerns about a post-Brexit UK are becoming even stronger than that.