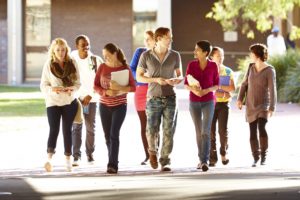 Summary: It costs much more to go to university in the UK than in any other OECD country. Students leave university with enormous debts that largely eliminate their chances of buying a house without parental help. The Student Loan Company has amassed over £90 billion of debt 70% of which will never be repaid. Far too many students take degrees that the country has little need of while other subjects are very short of candidates. Lengthy degree courses are necessary in many science subjects but for many a shorter more general degree as was common many years ago should be looked at seriously. Vocational tertiary education must be developed as the University Technical Colleges are proving much less successful than hoped.

There is a surprising amount of complacency surrounding the British university system. In England fees are now very high indeed at £9000 per annum, by far the highest of any OECD country (Note 1). Loans are available but many leaving with a debt well in excess of £50,000 will never be able to repay them particularly at the predatory interest rate being charged. Buying a house is out of reach for most young people today and having a substantial student loan makes that even harder (Note 2). Maintenance grants are very hard to come by and only available to those with very low parental income (Note 3).

There have been big changes in the structure and balance of tertiary education over the years. The definition of a University was simplified and Tony Blair, when Prime Minister targeted a participation rate of 50% by young people. Many former technical colleges were repackaged as universities and large numbers of vocational courses were eliminated. In the UK technical qualifications have never been greatly valued by the public. In Germany and other European countries they are of much higher status and generally highly sought after.

The consequence is that we have far too many students taking degrees which will be broadly irrelevant to their subsequent employment. The universities are in competition with one another, striving to increase student intake and therefore fee revenue. There is little control of the numbers of students attending different courses and virtually nothing done to encourage students to study subjects for which there is a significant shortage of skills within the UK.

Many years ago in Scotland, universities awarded Ordinary degrees after three years and Honours degrees after four. Scottish students have a broader secondary education and achieve Higher qualifications in many more subjects than English students who have followed an A-level course. The more able English students going to Scottish universities would be admitted directly into second year and could graduate after two years with an Ordinary degree, or three years if they wish to study the subject to a higher level. Today, the majority of full-time courses are three years with most language courses and many science and engineering courses leading to a Master’s degree after four years. Do we need them all to be so long?

The statistics of who does what after graduation are not easy to interpret but what is clear is that for subjects such as history, philosophy, creative arts and design, barely half of those graduating work and jobs dependent on their degree subject. Many jobs today require applicants to have a university degree even in a subject of at best peripheral relevance to the job. For many having a good 2-year degree would be just as satisfactory as having a longer one. In other subjects that normally lead to further training such as teacher training, it is highly likely that a 2-year degree would be a satisfactory preparation for teacher training. Shorter degrees would allow graduates to leave with greatly reduced student loan levels.

There is also the important matter of the university degrees that students take. Too often schools give relatively poor guidance to students, encouraging them to study whatever they fancy. The consequence is that the UK produces large numbers of graduates in subjects which are already relatively oversupplied in graduates. Relatively few graduates in subjects such as English, history and languages end up employed in those disciplines. At the same time the UK finds itself very short of graduates in science and technology, engineering and mathematics. At present almost nothing is done by government or by educational establishments to actively encourage a better balance in the way we educate our students.

This could be done simply by adjusting the fee levels so that courses affected by a shortage of applicants offered lower fee levels while those oversubscribed required higher fees. The government could set target levels for student numbers in different areas leaving universities to adjust fees to provide the desired outcome. An additional benefit of reducing the length of a significant number of university degrees would be to inject many more qualified individuals into the job market where there is a substantial shortage at present.

Another major area of concern is in technical education. Many technical colleges were closed or re-engineered as new Universities following Tony Blair’s aspiration to achieve 50% in tertiary education. This produced a corresponding loss on the availability of technical and vocational courses. University Technical Colleges have been established in recent years to provide training in specific subjects for students from the ages of 14-19. Unfortunately these are substantially under subscribed and it may well be that the hope to attract students away from mainstream secondary education, at an age where students are still very unsure about their future direction is just too early. Secondary schools that risk losing students make it difficult for the UTC’s to succeed. The UTC’s results at GCSE and A-level are significantly poorer than the national average state schools. The announcement that the government intends to improve the funding of further education colleges which have already suffered a 12% reduction between 2010 and 2020 is to be welcomed. One of the reasons that we need to bring in so many qualified workers from overseas is because of the squeeze on further education that started under Tony Blair and has continued enthusiastically under the Conservatives. Government needs to work with professional societies to design better recognised and better valued courses in many of the technical areas that are much more popular in Germany, for example that they are in the UK.

Sadly there is one area in which things are going completely in the wrong direction. Nationally there are about 24,000 nursing vacancies. The training of nurses in the UK became more difficult when the number of training places was reduced. It used to be that fees and living expenses for trainee nurses were funded by the taxpayer. That has ceased and students wishing to train as nurses are now faced with the same levels of fees as university students. As a consequence, the number of applicants to train as a nurse has dropped by over 23%. In addition, the effects of Brexit on EU confidence in the UK has meant that the number of European nurses applying to register in the UK has dropped by over 90%. There is more at: http://outsidethebubble.net/2017/02/02/government-driving-up-non-eu-immigration-intentionally/. There is no doubt that the shortage of nurses in the UK is going to become very much more acute in the future.

Note 1: The coalition government increased substantially student fees. In England the fees are the highest of any OECD country followed by the US and Japan. These now stand at £9000 per annum in England. In addition, living expenses are estimated to be in the region of £12,000 per annum (£15,000 in London). In Scotland tuition fees were abolished in 1999.

Note 2: A student leaving with debts will have their debt repayments taken into account should they want to get a mortgage to buy a house. With the rapid increases in house prices, recent graduates now have very little prospect of ever buying their own home unless they have an exceptionally well paid job. It is increasingly the case that young people are able to get onto the housing ladder only if their parents can help them. The bottom line is for most young people and particularly those from less wealthy background, get a degree and forget about owning your own home. You are going to be renting accommodation for the rest of your life.

Note 3: Student loans are repaid once the student is in employment at 9% over a £21,000 salary threshold. Around 70% of students are expected never to finish repaying their loans. If they have not cleared it after 30 years then the Student Loan Company writes that debt off. The outstanding student loan debt now stands at around an astonishing £90 billion.

1 Comment to “ British Higher Education System Failing the Young and the UK.”