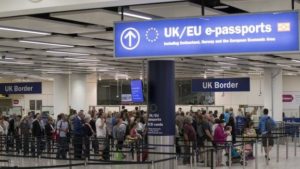 Summary: The rules that define the permitted extent of Freedom of Movement within the European Union allow very much more control than the UK currently exercises. Working EU citizens are allowed in but non-economically active EU citizens can only stay longer than three months if they have sufficient finance and take out a comprehensive sickness insurance policy. Benefit/welfare tourism is illegal and EU citizens who have not been working have no rights to benefits. Theresa May was Home Secretary from 2010 yet she did nothing even though it was in her power simply to implement the rules as drawn up when the UK joined the European Union. This is an extraordinary example of massive and shameful negligence by Theresa May and provided much of the momentum leading to the success of the Leave campaign.

One of the key promises of David Cameron’s government was to reduce immigration to a level of tens of thousands. The implementation of immigration policy was the responsibility of Theresa May, the Home Secretary from 2010 until she became Prime Minister in the middle of 2016 the responsibility of and. Around half the net migration into the UK was from countries outside the EU and therefore potentially controllable by the Home Office. The other half comes from the EU and politicians of all shades in the UK have accepted that the unrestricted freedom of movement (FoM) of people from the EU at any time was part of being a member of the European Union. There is presently no attempt to track people coming into the UK with an EU passport or indeed to track them when they leave the UK. Estimates of EU migration are indeed estimates as accurate figures do not exist. In a comment by Colin Gordon in a piece on the leftfootforward.org website by Ian Dunt it is pointed out that, incredibly, the above understanding of EU citizens rights under the FoM provisions are being seriously misrepresented by politicians from all sides and in particular from those of the Leave campaign. This is detailed in: http://tinyurl.com/jjysrx9. A more detailed piece by Prof.Brad K. Blitz may be found at: http://bit.ly/1DG3I4I. For those who really have a lot of time on your hands, the regulations covering free movement of workers within the European Union can be found at: http://tinyurl.com/zl5rw4s (the website of the European Parliament).

5 Comments to “ Massive Negligence by Theresa May when Home Secretary.”