admin
Friday, 03 November 2017 / Published in Uncategorized
A Tsunami is Coming This Way! 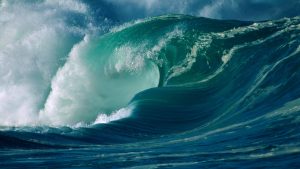 Summary: With unemployment in the UK so low it is easy to ignore some radical changes that are likely to make the employment of humans much less attractive in the not-too-distant future. British productivity will grow mainly by investment in advanced machines. Important developments in robotics and artificial intelligence will drive this forward at increasing speed. Some countries are already planning to normalise much shorter working weeks. A broad interest in Universal Basic Income will make part-time working more attractive. That would help to create a fairer society to improve the work-life balance for those today shackled to a system requiring long working hours, low pay and with little prospect of advancement. These changes are already happening. We cannot ignore them or imagine for a moment we will be insulated from them in the UK.

It may seem strange when UK unemployment is at a 42 year low to be concerned about the near future prospects for jobs. Our low unemployment rate disguises the fact that there is a lot of slack in the labour market with people employed part-time or on jobs that are highly repetitive and boring. The economy is growing very slowly indeed. The rise in Bank of England interest rates might make you think the corner has been turned but it’s still not looking good at all

Once the present Brexit/Tory shambles is sorted out we can expect significant increases in investment in the economy partly by government but particularly by business. Labour are keen to invest in infrastructure development. The worryingly low level of productivity in the UK will be boosted by investment in new machines and assembly and manufacturing techniques. In other countries this has gone ahead quite strongly while the UK lags. By starting late we will be investing in more advanced machines than other countries. Yet investment doesn’t imply massive increases in employment. Nissan are investing £100 million in their facility in Sunderland but will only increase jobs by just over 100. That’s all the jobs you get these days for £100 million investment

Car production lines are highly automated largely staffed by robots who work tirelessly, uncomplainingly, 24/7, don’t need bathroom or lunch breaks or an HR Department to keep them happy. Outside vast production lines robots are becoming increasingly entrenched. Their capabilities are improving daily. Have a look at this movie from Boston Dynamics (see here: https://www.youtube.com/watch?v=-7xvqQeoA8c ). Robots are under development in the UK that will repair potholes in roads (big market there clearly). Autonomous aircraft and ships and vehicles are under active development worldwide for military use (see: http://outsidethebubble.net/2017/04/10/defence-in-the-21st-century/ ). The rate of improvement in robot capability is dramatic. Tasks which were thought impossible a few years ago are now managed routinely.

The one area where humans have a distinct advantage is where skills are important and have to be learned with training taking months or years to complete. Think here of drivers, pilots and even surgeons. Humans need to be trained to carry out skilled tasks. The training principally involves the learner being helped to absorb the experience of others who are already skilled. Artificial intelligence (AI) is able to use the human experience to process datasets of all sorts that are too extensive for the intellect of individual humans. However recent progress in self training systems has been most impressive.

Google achieved a major milestone in October 2017 at their facility in central London. For some years they had been training computer systems to play the ancient Chinese game of Go, widely believed to be more difficult to master than chess. These trained systems had achieved very high levels of performance. However, the extraordinary new achievement, explained in a Nature paper (https://www.nature.com/articles/nature24270.pdf ) was to use a specialist computer system to teach itself Go without any external training. It was simply given the rules of the game and told to get on with it.

It started by simply playing Go against itself. It played a very large number of games, around 30 million, but by the end of that time had reached a level of expertise at Go that no human has ever achieved. Playing against the previous version of the machine which had already beaten all human players, it won 100-0.

Human players don’t ever play 30 million games but they do learn from many others who have honed their skills by building on the experience of yet more individuals. That is how we humans can learn very quickly. Yet the idea for the first time that a machine can be told what is needed and can train itself to achieve that goal so quickly has enormous implications for most other kinds of mechanical and intellectual challenges. The consequence must be that the number of jobs available for humans will decline and probably decline rather rapidly.

Another interesting announcement this week was that there are moves within Germany to make the standard working week only 28 hours long. At present, Germans work much shorter weeks than we do in the UK (it averaged 32.3 hours in the UK while in Germany they averaged 26.4 hours in 2014). At the same time, German workers have some of the highest levels of GDP per person in the world. 28.8 hour weeks were actually agreed within Volkswagen as far back as 1993 in negotiation with unions concerned that the reduction in demand for cars would lead to a massive redundancy in the main VW facility of over 30,000 jobs.

What is happening now is that German workers want a fair share of the benefits of Germany’s growing economy. They want to improve their work-life balance as well as achieving better hourly pay. They anticipate that the national demand for hours worked will continue declining and want the hours available to be shared as equitably as possible. They do not suggest stopping people working longer weeks but they want to ensure that someone working 28 hours per week will have a good standard of living.

The reducing demand for worked hours will mean that more and more people will be working at best part-time. The economics of this for employers becomes complicated and many countries are considering introducing a Universal Basic Income (UBI). Trials have already been carried out in Finland with great success and are about to start in part of Canada.

In Finland one region with 2000 unemployed individuals were given £500 per month with no strings attached. They didn’t have to pass any test or give any undertaking on how it might be spent. The results, however, were remarkable. Individuals receiving the UBI payments felt that the implicit security of this basic income gave them more confidence to take on additional, part-time jobs that might of themselves not give a big enough income. They also felt emboldened to try setting up their own small businesses that would never be profitable enough in the short-term to live on but with their lives being underpinned by UBI they felt it was something worth trying.

A scheme such as UBI at the right level could eliminate unemployment benefit, basic state pension, child benefit and many other payments already made to individuals. In fact, in a way, such payments are made to all of us already.

We have a tax-free allowance on our income, a way of supporting people on low income. A full UBI implementation would provide the same level of payment to everyone irrespective of their income. It would be added to that income and taxed accordingly but for the poor no tax would be payable until they had a decent income from other sources.

It is inconceivable that a Tory government would ever willingly give money to the poor with no strings attached. However Labour have been much more receptive to the idea and shadow chancellor, John McDonnell, has called UBI “an idea whose time may well have come” (see here: https://www.newstatesman.com/politics/economy/2017/07/could-labour-implement-universal-basic-income ).

The conclusion that we must face up to is that we shouldn’t expect the British full employment averaging 32 hours per week will continue for long. Robots and Systems which can teach themselves the skills that most of us have will increasingly make the employment of humans relatively unattractive. We must position ourselves to implement a revolution in employment before the tsunami overtakes us. We will all be surprised and shocked just how quickly it is upon us.

2 Comments to “ A Tsunami is Coming This Way!”