admin
Thursday, 02 November 2017 / Published in Uncategorized
You Need to Balance Your Own Budget but the Government Doesn’t and Shouldn’t. 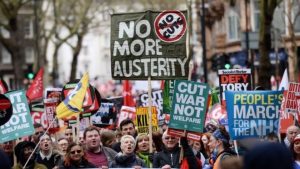 Summary: The Tory obsession with reducing the deficit with a programme of accelerating austerity is causing increasing harm to the great majority of working people in the UK. By refusing to borrow to invest in infrastructure and housing they continue to demonstrate they simply don’t understand basic economics. Much of the Brexit Leave campaign blamed immigration for depressing wages and standards of living. In reality it was a deliberate strategy of a Tory government wanting to transfer wealth from the poor to those already wealthy. Increasingly people accept that immigration is critical in providing workers for so many of the jobs that just need to be done. That message must be projected to the electorate if Labour are ever to regain the support of the poor working class. It is austerity and not immigration that is at the root of our problems.

The Institute for Fiscal Studies projects the number of children living in poverty will soar to around 5.2 million in the next five years because of the Tory austerity programme. All the progress made over the last 20 years in reducing childhood poverty will be reversed. The government and in particular Philip Hammond, the Chancellor of the Exchequer, continues to insist that we must balance our national income and expenditure. Only in that way, they say, can we get rid of the deficit. Sadly this seriously misunderstands economics and where money comes from.

We all know that if you or I want to buy anything, from a loaf of bread to a new car, we need first to have enough money to be able to afford it. When you run out of money you can buy nothing. That’s pretty well all you need to know about home economics. You cannot print money yourself and so you have to earn it one way or another. It may be from a pension, a salary, even income from an investment but if you don’t have some income you can’t have any expenditure.

When we look at the economy of a nation-state such as the UK things are very different. To understand this start with a £10 note. Signed by the Chief Cashier of the Bank of England it says “I promise to pay the bearer on demand the sum of £10”. If you go to the Bank of England and ask for your £10 you will simply be given a replacement £10 note. There’s nothing else. Many years ago there was a lot of gold in the basement of the Bank of England but that has long since gone.

So where did this £10 note come from? Well basically it was printed by the Bank of England. And who said they could do that? They simply decided themselves that that was a good thing to do. In this way the amount of money in circulation in the UK has increased over the years, currently over £43 billion and rising.

The Bank of England can print pretty well what it thinks fit. After the financial crash in 2008 they started printing money on a very large scale. Over the last 10 years the total is in the region of £500 billion. Virtually all that money effectively went to banks to improve their balance sheets. There are limits to what the Bank of England can print. If they printed so much that our overseas trading partners began to feel that the pound was not as valuable as it should be they would treat the pound accordingly. So printing too much doesn’t work but apparently printing £50 billion a year for the banks is fine.

The total value of goods and services produced in the UK, the Gross Domestic Product (GDP) is about £2 trillion per annum. The amount owed by the government is currently in the region of £1.6 trillion total or 90% of annual GDP. Other countries have much higher levels of debt (the US at 105%, Japan at 240%, 100% in France and hundred and 35% in Italy). In the UK the GDP generates approximately £720 billion in taxation. Government expenditure, however, is around £50 billion more than that per annum. This £50 billion leads to an increase in the deficit, the difference between income and expenditure. Compared with GDP this is very small indeed.

Why should this be a worry? Well it doesn’t need to be at all. At present a significant amount of the government expenditure is treated as essentially wasted in the sense of producing nothing of value to the nation whereas in fact a great deal of it is invested in a variety of assets with a long lifetime and a considerable value to the nation. Money used to build houses which will last hundred years is not in any way wasted. Building hospitals, schools, bridges, roads, railways etc produces assets that improve the value of the country, and its ability to grow and thrive (something it is clearly not doing now). Assuming that all such money spent on infrastructure simply adds to the deficit is fundamentally wrong.

The view that the deficit has to be reduced is therefore preposterous. Few other countries have a fully balanced budget. The battle to reduce the deficit is directly responsible for the austerity that has worsened the lot of the great majority of the less well-off members of our society. The Tories say we must continue pushing to reduce the deficit and this is likely to lead the Chancellor to continue with austerity in his November budget.

In practice austerity cuts the real standards of living of relatively poor people in the UK while allowing the wealthier to get even richer. Most people are worse off than they were 10 years ago. Unfortunately the Tories flatly refuse to contemplate increasing the tax take on the better off having shelved Labour’s proposal to increase the top tax rate to 50%. That is something that Labour would reinstate as well as rebalancing corporation tax and making a number of changes to make our economic system fairer, particularly with the taxation of multinationals.

Labour will also borrow money (essentially asking the Bank of England to print money) so that it can invest in a major programme of infrastructure development and in order to regenerate the housing stock in the country. Labour must increasingly emphasise that austerity is a Tory policy which hurts the great majority to the benefit of the wealthy. It allows the real decline in living standards to be blamed on immigrants and benefit scroungers whereas it all should be blamed on Tory austerity in support of the rich.

1 Comment to “ You Need to Balance Your Own Budget but the Government Doesn’t and Shouldn’t.”