admin
Monday, 16 October 2017 / Published in Uncategorized
The View from Catatonia*: Don’t Talk about the War! 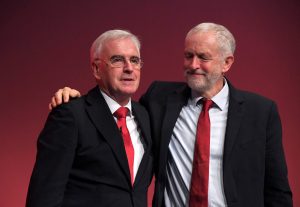 Summary: The problems within the Tory party are growing. The key battle in parliament now is the outcome of the Brexit Bill. A significant number of Tory MPs want important changes to the bill, changes that the Labour Party are keen to see as well. However the risk that hard right Brexiteers in the Tory party begin to project such disloyalty, as they would see it, as supporting Jeremy Corbyn is a potential source of trouble. If that becomes a widely held view then the support of those Remain Tory MPs could easily evaporate. Labour needs to sit quietly and absolutely avoid talking about the war.

No, not Catalonia but Catatonia*. This is an infectious epidemic whose symptoms are rampaging through the Tory party and particularly the Tory cabinet. Theresa May’s death spiral continues (see: http://outsidethebubble.net/2017/10/11/the-wheels-are-coming-off/ ) and Labour glee abounds.

However, for once, Labour really needs to be very, very quiet indeed about Brexit. In particular, many Tory party members view John McDonnell as a bigger threat than Jeremy Corbyn. It is undoubtedly true that John McDonnell has more fire in his belly and is somewhat to the left of Jeremy Corbyn. That is why both Corbyn and McDonnell must hide themselves away, plotting in secret!

Even more important than bringing Labour to power is restoring the authority of Parliament to make decisions about the future of the country. Labour are working with Tory Remainers to ensure that key components of the Tory Brexit Bill are modified to guarantee that Parliament will be the ultimate authority in making a decision on whatever has or has not been negotiated with the EU.

The one thing that has the potential to scupper these moves which are dependent on Tory Remain MPs voting against their own government’s bill is if the hard-core Brexiteers, a noisy, distinctly rabid bunch, start to claim that disloyal (as they would see it) MPs are simply voting with and for Jeremy Corbyn. This will be easy to claim and difficult to disprove. However any suggestion from Labour that there is the slightest whiff of truth in that and all those Tory Remainers will run back to Mummy. The vote will go with the government.

Getting these changes in the Brexit Bill are absolutely vital. The Tories are completely capable of ditching Theresa May and appointing a hard right such as Jacob Rees Mogg. Don’t forget that the Tories got within a whisker of appointing Andrea Leadsom, one of the longest surviving brain donors in the Tory party,  as Prime Minister. Fortunately Theresa May manage to ease her onto the hard shoulder in time. Unless Parliament has the authority to disagree with the Prime Minister there might be serious problems ahead.

Labour should be concentrating on the fractures that are appearing in the always dodgy relationship between the Tory non-majority and the DUP. The DUP are calling for the replacement of Philip Hammond as Chancellor. Whatever you might think of him he is at least one of the slightly more stable members of the Cabinet. He can actually add up. If he was replaced by Michael Gove, one of the names popular amongst Brexiteers for Chancellor, what little confidence remains in the UK government would evaporate completely.

Michael Gove is one of these older grey men (even when much younger than his present 50 he seemed terribly old) that seem to run the Tory party these days. To listen to him is wonderful. He is amazingly plausible, very articulate, very neat and tidy while all the time speaking incredible nonsense. While secretary of education he made an incredible mess of revising school curricula. He created creationist schools and introduce secondary level reforms that one expert claimed would “just wreck the English education system”. His pronouncements as Secretary of State for Environment Food and Rural Affairs further demonstrate his remarkable lack of grip of what is actually happening to the country or to farming. To think of the chaos he could cause as Chancellor is simply the stuff of nightmares.

So what should Labour do now? It is increasingly clear that the DUP favour a hard Brexit even though the majority of Northern Ireland voters were for Remain. The threat of a hard border between North and South, something that the DUP would prefer is particularly unpopular in Northern Ireland. The practical difficulties in managing such a border would be immense. However it undoubtedly would go right against the spirit and the letter of the Good Friday agreement that brought the Troubles to an end. It might well be illegal as an international agreement.

Labour should be using all its influence in Northern Ireland to keep drawing attention to the unpopularity of the DUP because of its role in Brexit. The DUP have been sliding in popularity within Northern Ireland for some time. You can read more about that here: http://outsidethebubble.net/2017/09/05/might-northern-ireland-trigger-another-british-general-election/ .

In particular Labour have amassed quite a lot of credit over the years in their more balanced support for left-wing Northern Ireland political parties and in particular Sinn Fein. Labour would certainly not want to undermine the Good Friday agreement, but now is the time to call in some of the debts. As soon the DUP start to distance themselves from the Tory party the current government will start to crumble. But this must not happen before the Brexit Bill is amended. That is why Labour must keep very quiet for a while. Their time will come.

These are some of the most worrying times for the UK we have ever faced. The potential damage to everything that this country has achieved over the last century is at risk.  Everybody keep quiet please. DO NOT TALK ABOUT THE WAR!

*Catatonia: defined on Google as “abnormality of movement and behaviour arising from a disturbed mental state (typically schizophrenia). It may involve repetitive or purposeless overactivity, or catalepsy, resistance to passive movement, and negativism.” Also as a state of immobility and stupor.