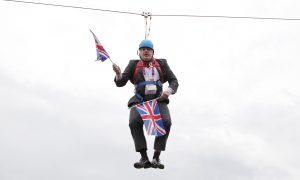 Summary: Boris has again lumbered into view to complicate further the Tory party’s view of what might happen because of Brexit. After checking that the Parsons Green bucket bomb had not killed anyone he decided to let his long piece in the Saturday Telegraph run. Boris was once for Remain and changed to Leave because he could see his political chances were much better there. If the DUP supported a hard Brexit they would be badly damaged within Northern Ireland were a soft or non-existent border with the south is widely demanded. By playing this card again he risks bringing down the Tory government. He would not be forgiven very easily by so many of his colleagues.

When Boris Johnson dropped his bombshell on 15 September, most were surprised that he had resurrected the most derided claim of the Leave campaign, that leaving would repatriate £350 million per week which could be used for the NHS. That claim was again laughed out of court yet again although Boris, predictably, claimed he had been misrepresented. If you read that article (see here: http://www.telegraph.co.uk/news/2017/09/15/boris-johnson-vision-bold-thriving-britain-enabled-brexit/)you can see wasn’t misrepresented at all.

His piece in the Telegraph argued for a much harder Brexit. Recently the Tory cabinet had been sliding towards a softer Brexit. Coming as it did, less than a week before Theresa May’s speech in Florence, Boris’s move was widely understood as an attempt to steer the Tory party to the right. That would stop Theresa May from simply making the speech she had promised, developing on the Lancaster House themes, probably moving the Brexit path further towards the centre.

Many see this as Boris on manoeuvres. The fame he had achieved during the Brexit campaign had faded. You might have thought him too busy in the Foreign Office, worrying about North Korea/Putin/Trump/Iran/Syria/Yemen. Despite his notorious laziness he still managed to find time to write 4000 words, emphasising patriotism. He had forgotten that Samuel Johnson had said “patriotism is the last refuge of the scoundrel”.

Yet this is much more than simply about Boris wanting to raise his profile and reposition himself as the leader of the right of the Tory party. With Theresa May under siege with her flaky majority things are very difficult for her. Her position is much like her being locked in the toilet on the last train home while the carriage is full of rowdy drunken hooligans (i.e. Tory MPs). Boris is shamelessly trying to exploit Theresa May’s weakness to his own advantage.

Boris’s approach to Brexit has a lot of support on the right of the Tory party. He may or may not have the support of Michael Gove (this appears to change daily). Given Michael’s enthusiasm for political long knives Boris probably can’t rely on it!

She daren’t sack Boris because that could easily lead to an outright attack on her leadership. Yet she dare not let the Tory party lurch towards hard Brexit because she would never get that through Parliament. The Tories are only in government because of the support of the DUP.

Within Northern Ireland DUP support has been declining progressively in recent years (see: http://outsidethebubble.net/2017/09/05/might-northern-ireland-trigger-another-british-general-election/). A hard Brexit deal would lead to a hard border between North and South in Ireland. If this was a consequence of DUP support for that policy they would be decimated in the polls and they know it.

The DUP understand that they are not really that important at Westminster. Their power base is entirely in Northern Ireland. Their extreme right-wing views on same-sex marriage and abortion as well as other things have meant their support is slipping anyway. Amongst the young the historical tribalism of Unionism and Nationalism is much less important. Unionists increasingly see Sinn Fein as being a forward-looking party for the young.

If Theresa May in Florence goes back on her intentions to reset the Brexit negotiations presumably in a way that reflects the view of the Tory cabinet then the future of the support the DUP offers her government will become increasingly problematic. That would lead to a General Election, and very probably a Labour majority. That would be easier for Labour as their will be no time to get a new Tory leader in place, particularly as there are few senior Tories who command much support. They know they cannot let Theresa May lead the party into another election given how badly it has gone for the Tories ever since.