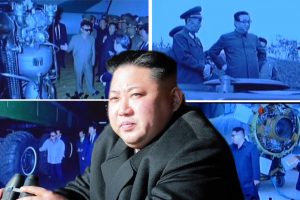 Summary: The war of words between the US and North Korea could easily spill over into military action. A full global conflagration is relatively unlikely. What is much more possible would be a limited strike by the US against North Korea followed by a tit-for-tat response by North Korea against South Korea. This could seriously damage the supply of computer memory chips which are critical for a vast range of digital equipment. That would have a major effect on the world economy and should not be underestimated in its importance.

The Korean War started in 1950 when North Korea invaded South Korea. The UN with the US as the principal force came to the aid of South Korea while China and the Soviet Union backed North Korea. In 1953 an armistice was signed creating the Korean demilitarised zone (DMZ) to separate North and South Korea but no peace treaty was ever signed and technically the two Koreas are still at war.

With the election of Donald Trump and the increasingly bellicose pronouncements from the leader of North Korea, Kim Jong-un, worldwide concern has increased. There is a worry that this might lead to a global conflagration. I believe that these concerns are exaggerated.

The recent military parade in Pyongyang showed intercontinental ballistic missiles that were subsequently shown to be wooden models. They have, however, demonstrated long-range missiles successfully and so there undoubtedly will be growing concern within the US. The North Korean regime has exploded nuclear devices but so far these have not been particularly powerful or impressive. They are probably some way away from developing viable nuclear weapons rather than experimental explosions.  Although missiles have been launched, many have not performed properly and those that have are limited in range.

Nevertheless, the American Administration is undoubtedly concerned about the prospect of North Korea being able to attack the US. What is much more likely than an all-out war is some much more limited military action by the US intended to hinder substantially North Korean military progress. That in turn would not lead to a nuclear response from North Korea (if only because that response is not something they could give now).

Much more likely would be a more limited attack on South Korea since US assets are largely unreachable by North Korea’s weaponry. Within easy reach of the DMZ is the heartland of South Korea’s technological explosion. Such an attack could have a major effect on the South Korean economy. It would also have a devastating effect on the world.

When viewed from right-wing US perspective that might be dismissed as being too bad. South Korea is a long way away and they should be able to stand up to themselves. Who cares if a number of foreigners in a distant country are killed? The US is able to brush that aside remarkably easily throughout the Middle East. But if there was even limited military action by North Korea against South Korea it could have a devastating effect on a major part of the world economy which depends on South Korea for critical electronic components.

Without these memory chips it would simply stop being possible to manufacture almost any of the above devices that we depend on so much today.  About 75% of the DRAMs manufactured worldwide are made in South Korea and most of those within 100 km of the heavily armed DMZ. The two biggest companies that make these devices are Samsung and  SK Hynix. Both are based near Seoul. South Korea is the second largest global semiconductor manufacturer and, in memory chips completely dominates the supply.

The manufacture of these critical devices is a particularly tricky business requiring extraordinarily expensive fabrication plants. Recent estimates of the typical capital expenditure needed for a new fab facility are in the range of $4 billion-$10 billion depending on the type of memory to be manufactured. Any damage to such a facility would be extremely expensive to repair but above all would take a very long time to undertake as the manufacture of the machines needed is a particularly difficult process in itself. Delivery times on new fab facilities are measured in years.

The conditions needed for the manufacture of state-of-the-art memory components are also very demanding. A single speck of dust can completely destroy a device and any chemical contamination can bring the entire production facility to a halt. An attack by North Korea using conventional weapons even if they do not directly hit a semiconductor manufacturing facility could easily produce enough ground percussion to dislodge dust in the vicinity of the fab line. They would have to be closed immediately and fully checked and, if necessary,  decontaminated before restarting even if they experienced no direct damage.

However, if the memory manufacturing facilities around Seoul are affected in any way then a major part of the world’s supplies of memory devices could be halted for a significant length of time. The manufacture of new mobile phones, computers, Internet storage devices and systems etc. would come to a halt no matter where those units were manufactured. If there are no memory chips then none of them can be made. If the memory supply dries up the effect on our modern economy would be relatively rapid and very severe.

A few years ago semiconductor production in Thailand was affected by flooding and that caused a significant shortage of disk drives used for bulk storage in computer systems. Eventually that got back online. Anything like this happening in South Korea to the DRAM supply would be much harder on the world economy. It would be an easy hit for North Korea, not likely to produce a much more intense reaction from the West and therefore very tempting for the North Korean leader who seems to believe his own extraordinary rhetoric.