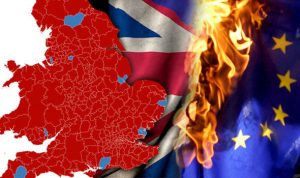 Summary: We are told repeatedly that the referendum result represents the “Democratic Will of the People”. It does not. A close majority was obtained on the basis of the most outrageous lies. As the Brexit negotiations progress more and more of these lies will be revealed for what they are. We should stop pretending there is any merit in them at all and steel ourselves to say that the UK simply got it wrong and that we should stay in the EU. Yes there will be considerable loss of face, and we have already lost a great deal of respect for the nonsense of the referendum and now for the collapse of the Tory party at the recent election. We’ve screwed up, we should admit it and get on with trying to put the UK back together again.

Imagine you bought a new television set. You have been told in the shop of all the wonderful features it had and you are looking forward to using them. You have just unpacked it and you find that what you have bought is nothing like you were promised. You would be very upset and expect to get a full refund. Indeed, if it was serious enough, you might report them to Trading Standards. Telling lies to get someone to buy something is a crime.

The UK voted to leave the EU on a very narrow 52:48 majority. Increasingly people are realising just how dishonest the whole Leave campaign was and groups such as farmers, business people and many others are turning against Brexit as interpreted by the right-wing, fiercely anti-EU Tories and the right-wing media.

Tom Smith on a Labourlist comment pointed out that vote disenfranchised the more than 1 million Brits living and working in the EU, together with 3 million EU citizens who have lived in the UK in many cases for decades, pay taxes and have an enormous investment in the future of the UK.  The overwhelming majority of these would undoubtedly have voted to Remain.

The British government has just started the Brexit negotiations. Already the tough positioning that Theresa May thought was going to win her a general election has turned to dust. The EU are making it clear that expectations of a brilliant deal from the EU giving us all the advantages and none of the costs of being members is simply make-believe.

We will see over the next few months just how far the Leave campaign’s claims are at variance with the reality. Then we have to address the fundamental problem. The referendum was won for Leave on the basis of lies. We must stop pretending that it is the Democratic Will of the People. It simply is not.

The last election showed just how little trust there is in those Conservative politicians who lied to us so brilliantly during the referendum campaign. Those same politicians are now in charge of negotiating Brexit, negotiations that they are deeply unsuited to carrying out. The Tories are always going to have big problems with the extreme right and no doubt Theresa May hoped she would be able to deal with them given a large majority. She did not get it and the country increasingly realises that so much of what the Tories want is simply increasing the inequality in the country.

We have to keep repeating again and again that we are being led away from EU on the basis of outrageous lies. We should also stop accepting that, notwithstanding those lies, that leaving the EU is the Democratic Will of the People. In fact there is no mandate of any sort for leaving the EU and we should simply stop this nonsense as soon as we can.

The whole business of the referendum has damaged our reputation worldwide and particularly with our EU partners. There will be a considerable loss of face if we do a U-turn. However in this case it is what we should do. Our brilliant democratic system screwed up during the referendum. It did a much better job in the general election and now we must get on with trying to put the UK back together again after the deeply damaging seven years of Tory austerity.