admin
Thursday, 25 May 2017 / Published in Uncategorized
Theresa May: Weak, Unstable and Now Unsafe. 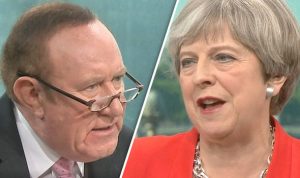 Summary: Theresa May wants to be seen as a leader, strong and stable and resolute in dealing with the EU. Her extraordinary U-turn on the “Dementia Tax” and other things gives the lie to that. The awful terrorist attack in Manchester has now shone a spotlight on the fact that as Home Secretary she cut police numbers by nearly 20,000. Police chiefs have said for some time that these cuts are substantially compromising security.

Theresa May is now been revealed in her true colours. The Economist newspaper now calls her “Theresa Maybe”. Not strong and stable and safe in her hands at all. Rather she has proved to be weak and unstable. She has also managed to make our country significantly less safe by cutting police numbers substantially while she was in the Home Office.

Her extraordinary U-turn on her social care policy and the “Dementia Tax” was understandable, given the negativity in the press. However this was compounded by her flat refusal to admit there had been any change. Indeed “the change” in policy she announced has been very ambiguous, only an undertaking to look at it again but it is clear that there is actually no commitment at all for any change. It’s not the first time she has done a U-turn on a major political issue.

The Tory abandonment of the national insurance increase for self-employed, the failure to take 3000 unaccompanied refugee children agreed by the government and only take 350 (and then under great pressure) was disgraceful. Despite considerable opposition from within her own party at as well as from outside she continues to stick with the preposterous policy of reducing net immigration to under 100,000. Even the most hardline Brexiteers appreciate that this is impossible.

This been relatively little coverage about her policy to affect negatively pensioners, the removal of the winter fuel allowance. For millionaire cabinet members a few hundred pounds here or there probably isn’t very important. If you’re a pensioner it can be a very significant amount of money. Pensioners may have done disproportionately well with the triple lock on pension increases but removing the winter fuel allowance will in practice put them back by several years.

Before the dreadful terrorist attack in Manchester there was considerable concern about police numbers. Police sources had made it clear that the drop of nearly 20,000 in the police compliment while Theresa May was Home Secretary (2010-2016) was having a devastating effect on the capacity of police to carry out the sort of duties the public expected of them.

The government claims that crime has been dropping but those statistics ignore the almost 6 million fraud and cyber-crimes committed in that same period. Soon there will be a realisation that the lack of manpower to help tracking “persons of interest” must undoubtedly contribute to a reduced level of security. Winding the official level up to “critical” doesn’t improve things at all.

For many years, Jeremy Corbyn has understood the toxic link between the way Western powers have intervened in the Middle East and the level of threat from terrorists in that region. For many years it has not been politically correct to even suggest there is a link because so many British lives have been lost because of ill-conceived military actions throughout the area.

The great majority of British people are sick and tired of intervening overseas and trying to change regimes so that we end up with situations as we have in Libya, arguably in a much worse situation and I was under Gaddafi. Jeremy Corbyn’s view that military action is something we must be prepared to take only as a last resort is too often ridiculed by the right-wing media as disguised pacifism.

Jeremy Corbyn has been consistent in his views about this and many other aspects of his politics. Theresa May has actually been in power for many years yet has little to show for it (see: http://outsidethebubble.net/2017/04/24/we-need-to-talk-about-theresa/ ). The way she is now seen as weak, unstable and now very unsafe ought to be understood that this is the way she really is.