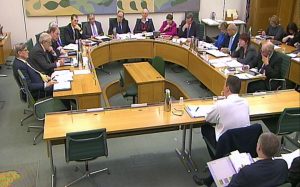 Prime Minister David Cameron answers questions in front of the Liaison Select Committee at the House of Commons, London.

Summary: reports of Parliamentary Committees are very important as they try to hold the government to account. The cross parliamentary nature of these committees and the fact that most of the reports are agreed by the great majority of the committee make them much more balanced and less partisan than so many political interventions. With the decision to hold a snap General Election many of these reports (there have been more than thirty since Parliament broke up) are likely to be ignored. We look at a number of those that are particularly important and should be taken seriously.

Now that the election campaign is underway we are braced for series of misleading announcements and claims. One of the better developments in recent years with our parliamentary system has been the increasing importance of parliamentary committees. These are groups of MPs chosen from across the political spectrum and charged with looking at particular issues of concern. They then produce a report which is agreed by the committee as being relatively fair and balanced.

The reports of these committees therefore are important as they are one of the most effective ways of holding the government to account. With essentially no parliamentary opposition, the government has been inclined to ignore reports it didn’t care for. It is important that we do not lose sight of what the latest batch recommend.

The government would dearly like us to forget all about them. We really must not do that.

Here is a selection taken from the more than thirty published since Parliament broke up:

Food Waste in England: this is a report of the Environment, Food and Rural Affairs Committee. The level of food waste in the UK is very high,  running at over £20 billion per year (post-farm-gate). Supermarkets have been a major cause of this waste (the obsession with best before dates rather than use by dates)  and the committee praised Tesco for publishing much more food waste data, and noted that Sainsbury’s is moving in the same general direction. However they expressed concern that other retailers had not followed and that the voluntary approach broadly is not working. They suggest that this should be legislated for and such changes would create much more transparency. They also think it important that schoolchildren are taught about this from an early age. (See: https://www.publications.parliament.uk/pa/cm201617/cmselect/cmenvfru/429/42909.htm#_idTextAnchor060 )

Feeding the Nation: Labour Constraints: there is a widespread concern amongst horticultural and agricultural suppliers about the difficulty in finding labour. The Environment, Food and Rural Affairs Committee expressed great concern that Brexit could make the current bad situation very much worse. They mentioned specifically that the reality of what is already happening on farms around the country is utterly different from the impressions given by the government which appear to be largely ignorant of the current needs of agriculture and certainly of its future needs. Their report is here: https://www.publications.parliament.uk/pa/cm201617/cmselect/cmenvfru/1009/100907.htm .

Access to General Practice: this is a report of the Public Accounts Committee looking at the problems with GP access and the consequences for the NHS more widely. Although the government had vowed in 2015 to increase the number of GPs by 5000 over the next five years, the numbers actually fell over the last year. They also noted that patients registered with practices that had shorter core hours opening times (those between 8:00am to 6:30pm) attend A&E departments more often than on average. This report is here: https://www.publications.parliament.uk/pa/cm201617/cmselect/cmpubacc/892/89205.htm#_idTextAnchor007

Integrating Health and Social Care: another report from the Public Accounts Committee, this time looking at the Better Care Fund that was intended to provide more funding for social care is described in the report as being “little more than a ruse” to simply transfer money out of the NHS into the social care budget. They find it is simply a highly bureaucratic initiative to disguise the way that local council budgets have been cut. This report may be found here: https://www.publications.parliament.uk/pa/cm201617/cmselect/cmpubacc/959/95902.htm

NHS Ambulance Services: another report from the Public Accounts Committee (yes, they have been busy) examined reports that emergency patients are taking far too long to get to hospital by ambulance. There is a target to get patients to the emergency department within 15 minutes. In 2010-11 80% of transfers met that target whereas in 2015-16 that number had dropped to only 58%. The Committee found that the ambulance services had great difficulty in finding labour and that the high sickness absence rates experienced by ambulance services caused by the badly overworked way they are currently operating in is exacerbating these problems. This report can be found here: https://www.publications.parliament.uk/pa/cm201617/cmselect/cmpubacc/1035/103505.htm#_idTextAnchor004 .

Strategic Defence and Security Review 2015: Headline Ambitions for the Army. Outsidethebubble.net has posted articles dealing with the desperate problems of the current MoD procurement programme and the remarkable unreliability of so much of the equipment we depend on for our defence (see: http://outsidethebubble.net/2017/03/16/britain-defenceless-in-the-21st-century/ and http://outsidethebubble.net/2017/04/10/defence-in-the-21st-century/). Now the Defence Committee has expressed its concern about the lack of trained soldiers in the Regular Army. In 2012 the target was lowered from 95,000 to 82,000, but it currently remains stubbornly below 80,000. It expresses considerable concern about the inability of our Army to cope with any significant external aggression. They also expressed concern that the Review has added nearly £25 billion of new commitments to cover an, as yet uncosted, programme for the new Mechanised Infantry Vehicle. This leads to considerable budgetary uncertainties for the future. This report can be found here: https://www.publications.parliament.uk/pa/cm201617/cmselect/cmdfence/108/10810.htm#_idTextAnchor082 .

Housing: State of the Nation: the Public Accounts Committee is particularly concerned about the remarkable complacency and lack of urgency in dealing with the matter of homelessness. the Department for Communities and Local Government plan to build a million houses over the next five years but more than 1.4 million are actually required. This is a matter which has also been dealt with on outsidethebubble.net (see: http://outsidethebubble.net/2016/09/27/a-fairer-deal-solving-the-housing-crisis/ ). This report may be found here: https://www.publications.parliament.uk/pa/cm201617/cmselect/cmpubacc/958/95802.htm.

The Structure of the Homebuilding Industry: there is another housing report from the Communities and Local Government Select Committee. In particular, they have been looking at the skills shortage that will be needed to produce a real leap in the supply of housing. They are concerned here about the serious shortage of labour and in particular the supply of labour from the European Union. Already the workforce are beginning to be nervous about the future they might have after Brexit leading to major challenges in finding a big enough labour force to even begin to address the housing crisis. Their report can be found here: https://www.publications.parliament.uk/pa/cm201617/cmselect/cmcomloc/46/4611.htm#_idTextAnchor084

Citizens Income: a report from the Work and Pensions Committee is particularly negative about calls for a Citizens Income. The report suggests it is little more than a distraction from serious reform of the welfare system and advises the government not to expend any energy on it. The report may be found here: https://www.publications.parliament.uk/pa/cm201617/cmselect/cmworpen/793/79303.htm#_idTextAnchor003