The Labour Brand Is Becoming Irredeemably Toxic. What Can We Do Now?

admin
Friday, 24 March 2017 / Published in Uncategorized
The Labour Brand Is Becoming Irredeemably Toxic. What Can We Do Now? 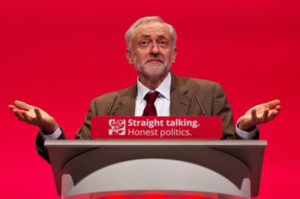 Summary: The Labour Party is widely agreed to be in a pretty bad state. The manoeuvrings in the Momentum group are most concerning and indeed any attempt to gain exceptional influence over Labour Party policies from one narrow agenda group is most concerning. Now we hear of the disintegration of the office of Jeremy Corbyn with massive staff losses over the last year. Getting things back on track is an urgent matter and the people at the top of the Labour Party simply don’t seem to understand this. Without action the current death spiral of the Labour Party will end relatively soon. We need to identify leaders that will be supported by Labour Party grassroot members and give them every support to turn things round.

Labour supporters keep hoping that things will improve. Many feel that a change of leader is what is needed but this simply ignores the fact that Labour as a brand (in marketing parlance) is toxic and will be very hard to repair. It isn’t just because of Jeremy Corbyn. It is true that Corbyn has become a figure of ridicule and is misreported pretty widely. But if we think how any other leader might improve things it would still be very difficult to resurrect Labour in a positive way.

The rot was under way many years ago and Labour have failed to keep the brand fresh and interesting. It probably started with Tony Blair and the Iraq war, faltered during the Blair/Brown squabbles and particularly when Labour under Ed Miliband was too timid to resist the nonsense that the British economy was in a dreadful state because of Labour overspending when in fact the British recession simply followed the worldwide recession. Now it doesn’t matter what Labour says and when it says it. The presentation is mediocre and the media have Labour on the run. Labour are currently flogging a dead horse with an uninspiring rider.

When a brand becomes bad it’s very difficult to bring it back to life. Most companies would simply develop a different brand which may well be what they wanted the old brand to be, but it has to be new and fresh and interesting. The problem with reconstructing the Labour party is that there are large numbers of genuine left-wing supporters who want it to work. Many feel very unhappy at the current drift and lack of focus. They may be leaving in pretty large numbers at the moment but they still want a left-wing socialist party to represent their views and the views of the many who have lost out since the start of the Tory recession so very badly. Even now, with the membership under half a million, that is still a very large number that simply cannot be brushed to one side.

The Momentum group was set up to build on the energy and enthusiasm generated by the Jeremy Corbyn for Labour leader campaign. It has over 150 local groups across the UK and a total membership of about 22,000 or about 5% of Labour Party members. This sort of organisation could be an excellent way for Labour to build strength but at present it appears to be moving ever leftwards in ways that the great majority of the Parliamentary Labour Party and general Party members believe will ultimately harm the prospects of success for Labour at a general election. And they are probably right.

The evidence of a leftward drift is very strong. A recent recording of Jon Lansman of Momentum made it clear of his desire to affiliate the Unite union (the biggest in the UK) with the group he founded and become fully integrated with it. At the same time there are moves to change Labour Party rules enabling future candidates to require only 5% of MPs to support them rather than the present 15%. That would make it easier for far left candidates to stand as a future Labour leader.

The significance of all this has been energetically denied by Len McCluskey, the President of Unite but it is pretty implausible that Jon Lansman could be as out of touch with the current reality as Len McCluskey would have you believe. Sadly the presence of Momentum as driven by its present leaders is not a particularly democratic organisation. The constitution of Momentum allows the ruling committees to make pretty well any decision they like without reference to its grassroots members. The way it is run now is certainly exacerbating the divisions within the Labour Party. You don’t even need to be a member of the Labour Party to be an effective presence in Momentum. The rules that require it will not be enforced according to Jon Lansman. Indeed there are senior members of the executive today that are not Labour Party members.

We now have reports from Jeremy Corbyn’s office that yet more aides are leaving the team. The list includes Jayne Fisher, Matt Zarb-Cousin, Nancy Platts, Simon Fletcher, Mike Hatchett, Neale Coleman and Anneliese Midgley. David Prescott, son of the former deputy PM John Prescott is leaving as Mr Corbyn speechwriter barely 3 months after taking up that job. It is clear that the office is in turmoil and is perhaps the strongest evidence of how seriously weak the Labour Party is at present. If the leader’s office is so chaotic, what chance of a credible and successful general election campaign?

It is widely agreed that the fragmentation of Labour continues, and its prospects of electoral success are diminishing by the day. John McDonnell, the Shadow Chancellor, thinks it will take as long as two years to turn things round. He and Jeremy Corbyn have been in charge of the Labour Party now for over 18 months and nothing much seems to have happened. A search online for what might be current Labour Party policy reveals nothing. There just isn’t anything to look at, nothing to get behind and act a rallying cry at a time when the country desperately needs an effective opposition of any sort.

Most of the criticism of the present state of the Labour Party focuses on the leader. However if you think about what Labour would be like with a leader of your choice you will realise that changing the leader will make little difference in the short-term and the weakness of the Labour brand would make regeneration of the Party very hard indeed. Given that there is a possibility of a general election before too long it is clear that even a new leader might be too little and too late.

Unfortunately it’s not enough to catalogue what’s going wrong. We have to work out what must be done to move things forward. The question is therefore: how do we reinvent Labour? For a start nobody really seems to know what Labour’s policies actually are at present. Only three weeks ago Jeremy Corbyn produced a form asking people to say what mattered most to them, 18 months after he was first elected. We have to accept that any policies that Labour might have are, at present, vapourware. Such a policy needs to be articulated then modified and refined to get rid of its rough edges and miscalculations. A satisfactory policy has to include a serious attempt to cost each of the items within it, something that is essential if we are to gain any kind of economic credibility. That has been the great weak point of Labour since 2008 as it was not prepared since to resist Tory accusations that it was the Labour economic incompetence that led to the British recession.

Once there is something that is approximating to an agreed policy we need to find charismatic individuals who can bring the party together. There is an assumption amongst many that the current Labour Party membership is very skewed towards the left and does not represent the views of those who might reasonably vote for Labour. This is difficult to sustain because the Labour Party is the Labour Party we’ve got, not one that we might like to redefine. There is no doubt that the mood in the party is markedly more to the left than the manifesto used by Labour in the 2015 general election. Yet poll after poll makes it clear that left-wing policies continue to be popular amongst Labour Party members and with the general public.

Relatively few Labour MPs are well known. Sadiq Khan is popular but as Mayor of London he is not an MP (though there are ways of fixing that). Others that have been reasonably successful in Parliament or at the Labour Party conference include Keir Starmer (shadow Brexit secretary), Clive Lewis (while shadow defence secretary made probably the best speech of the last party conference) and Chuka Umunna (articulate, charismatic but perceived as too new Labour, too right-wing for many). Rumour has it that Jeremy Corbyn’s office are keen to groom a younger very left-wing replacement for Jeremy. However until they can manipulate the nominating percentage for leadership from 15% to 5% there is little chance that Jeremy will be permitted to resign by those currently pulling the strings.

Then the trouble starts. Can we wait till Jeremy resigns? Will there be enough time to turn things round and reinvent Labour? Will the Parliamentary Labour Party start doing some serious arm-twisting for the good of the party? Or is the whole thing in a hopeless and irredeemable death spiral. Thoughts please, on a postcard!

May-hem In the Housing Market.