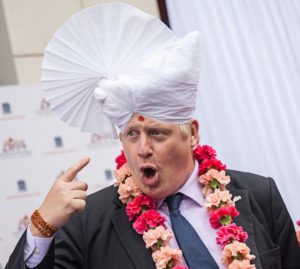 Summary: a strange new cult, the BeLeavers, has been discovered in the UK. Their ambition is to leave the EU as rapidly and wholeheartedly as possible. Their vision of the future is of a strange fantasyland where the opinions of experts count for nothing and were they are happiest believing in alternative facts, formerly known as lies. Their vision of life in the future outside the EU is wonderfully imaginative. It involves living on another planet or in a parallel universe. International happenings are spun for the consumption of their followers in extraordinarily creative ways, defying gravity and certainly common sense. They have taken over the Tory party with their extreme views, and attack energetically any one who questions their vision of the future.

In the last few months there has been a remarkable flowering of a cult thought to be called the BeLeavers. Apparently there was some kind of referendum won with a small majority by those who wanted to leave the European Union. Almost the same number wanted to remain.

The cult is led by politicians who realised that by changing sides following the referendum their prospects of power would be enhanced. Most economists, businessmen, MPs etc believe that leaving the EU will damage the poor and middle-class in British society but the leaders are all wealthy. They do not need to concern themselves with the welfare of those who voted for them.

The BeLeavers are led by ArchWizard Boris and supported by David “The People Have Spoken” Davies. There is also apparently someone called Liam Fox, though few can remember what his purpose is. They are egged on to more and more extreme views on how BeLeavers want the future shape of the UK to be by a quite annoying small person called Nigel Farage. He has a very right-wing views which may or may not be related to his having the same initials as the National Front. Nigel is strangely under the influence of an eccentric American in charge of a worryingly similar cult in the United States. This American shares hair colouring with ArchWizard Boris. Could this be confirmation that Aryan genetics are key? Certainly, it might help explain why both are so negative about foreigners particularly if they are not Christian. Nigel returns from his sycophantic hours with the American to explain to us that everything is going so well in the US. Even in the US Nigel assures us there is little dissent.

Another of the acolytes is called Michael Gove. He also is a politician who changed sides and opinions. He had contrived to stab ArchWizard Boris in the back (possibly in the front) just when poor Boris thought he would become Master of the Universe. Dear Michael has difficulty mastering arguments against anyone who actually has qualifications and experience to backup views on the future of the UK. These people he calls “Experts” and he confidently insists that we must ignore them and rely on what are now called “Alternative Facts” to provide information for the people. It is important that the people have access to these Alternative Facts and so these are propagated by right-wing newspapers in the UK. In the past these Alternative Facts were referred to as “Lies”, a term frowned upon by BeLeavers. However there is no doubt that most of the promises of the BeLeavers turned to dust almost as soon as the results of the referendum was declared. Mind you, most of the dire consequences threatened by their opposition, the so-called Remoaners haven’t turned out to be much more reliable.

Their views about how things will work for the UK once we have left the European Union were helpfully summarised by the always thoughtful Kenneth Clarke. He described recently to the House of Commons that the BeLeavers expect us to tumble down a rabbit hole, and emerge into a wonderland where suddenly world leaders are queueing up to strike trade deals with Britain including such nice men as president Trump and the Turkish President Mr Erdogan. It wouldn’t matter that these countries are very protectionist and are cancelling trade deals right, left and centre. They would really want to work with the UK. Ken Clarke imagined there might be a Mad Hatter somewhere holding a tea party with a dormouse.

The BeLeavers have got an ally who also has had her views transformed by the referendum and the opportunity for great power. She is called Theresa “Brexit means Brexit” May and she managed to become Prime Minister without any national election. Sadly she cannot think of any way of cutting back on the immigration she is now so obsessive about. In fact she could have done this years ago as Home Secretary. See: http://outsidethebubble.net/2016/12/06/massive-negligence-by-theresa-may-when-home-secretary/ . She believes that by the UK no longer having access to the Single Market of the EU then everything will work, immigration can be controlled. This of course ignores the fact that the country can only operate with immigrants because so many of the training places for the jobs immigrants fill have been cut as part of the UK austerity campaign. The worst example is what her government has arranged to discourage young people from training to be a nurse. See: http://outsidethebubble.net/2017/02/02/government-driving-up-non-eu-immigration-intentionally/. The NHS, social care services and education will increasingly suffer but the leaders and strongest enthusiasts amongst the BeLeavers are confident that their private wealth will insulated them and their families from such inconveniences.

Of course Theresa May has sadly forgotten that many of those campaigning to Leave were adamant that there was no suggestion of leaving the single market and indeed that the arrangements that Norway has were ideal. Parliamentarians who on the record as saying clearly we would remain in the single market included Daniel Hannan, Owen Paterson, Matthew Elliott (the Vote Leave Chief Executive), the financier of much of the Leave campaign, Arron Banks and even the very annoying Nigel Farage. But again the Leave case was entirely based on Lies so perhaps these further changes of mind could be understood.

One of the most extraordinary things is that for many years Tory prime ministers have had trouble with a few extremist backbenchers often described as the Tory party’s headbangers. Curiously it is the same extremists who have managed to take over the direction that the Tories will take when negotiating Brexit. We have the slightly worrying sight of Peter Bone in the House sounding as if he has just been appointed the Kumquat of Stoke Poges. More distressing was to listen to John Redwood, also in the House a few days ago, celebrating the end of everything most of us hold dear as he was transported skyward in a miasma of ecstasy. All the ex-headbangers expect everyone to fall in behind them though I have very little confidence that they would have fallen in behind the rest of us had the referendum gone the other way. Sadly the lunatics appear to have taken over the asylum!

It’s all rather sad really. I’m sure life will be delightful down the rabbit hole but I must say I rather liked it up here in the real world. It’s true that we are living in pretty close to a one-party state as Labour have degenerated into a giggling pointless group of directionless Lefties who cannot really work out whether half chocolate biscuits are better with milk or plain chocolate. But at least by staying above ground the poor have a fighting chance of becoming less poor in the future although of course the wealthy might even suffer. But that would require a Labour government, something that a few of us remember we apparently had in the past though that was probably a figment of our fevered imaginations. Perhaps there is another rabbit hole somewhere that we can enter and find a happy land where the leader of the Labour Party has resigned and things can move forward. Too much to hope for, I fear!