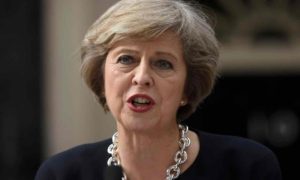 Summary: The latest interview with Theresa May made it clear that she does not expect to be able to pick and mix in our new relationship with the EU and essentially hard Brexit is what we are going to get. It is increasingly clear that she actually has no plan at all about negotiating with the EU. She also has produced almost no new initiatives in the six months since she became Prime Minister. Lofty speeches claiming that the Tories will become the party of social justice are exposed as extraordinary examples of disinformation. Despite so much evidence that many parts of the NHS are in crisis no new cash is promised. She actually doesn’t have any ideas at all and these wonderful new clothes that she and Tories are claiming are in fact completely invisible. The Empress is naked!

It is becoming more and more clear that Theresa May has actually produced no significant new initiatives in the six months since she became Prime Minister. Much of what she says is devoid of detail. “Brexit means Brexit”. “We will take back control of our borders”. As soon as she was appointed PM she gave a speech on the steps of Downing Street emphasising the importance of social justice particularly for ordinary working-class families that are just about managing.

On 9 January 2017 she explained how a government would improve mental-health services in the UK. Virtually no new money was mentioned (possibly £15 million for care services or approximately 25p per head for the UK). So little has been happening with this government that even the relatively sycophantic Economist despaired and called her Theresa Maybe (see: http://tinyurl.com/jhd5lxs). On 8 January 2017 Andrew Rawnsley in the Observer (see: http://tinyurl.com/zxsw2k3) worries that the Prime Minister is risking becoming the Queen of Misrule. She still has some support, surprisingly. Matthew d’Ancona on 9 January 2017 in the Guardian (see: http://tinyurl.com/z8wefnp) says that there is lots of happening in the background and cites half-dozen green papers that have been produced, ignoring the fact that green papers are produced by departmental civil servants as discussion documents for future policy and do not represent in any way ministerial or prime ministerial activity.

The most worrying event this weekend was the interview the Prime Minister gave with Sophy Ridge on Sky where her approach seemed to be to go for a hard Brexit and then negotiate our way back in as far as we could. The pound sterling fell sharply against the US dollar. In the last few minutes she is claiming that that’s not what she said at all although sadly you can still listen to it on the web!

Yet still we have no idea at all about her negotiating strategy. Sir Ivan Rogers felt that the government approach was a muddle. That now seems to be a little kind. There really isn’t any plan at all and simply saying “hard Brexit” and then hope we can sort out the mess is extraordinary naïve and will not endear the UK the other members of the EU. We may have many years in some damaging WTO trade rule condition while the economy gradually sinks into the mire.

The Prime Minister claims that by taking back control of our borders we will be able to manage immigration. Yet she was Home Secretary for nearly 6 years with full responsibility for immigration when around half of the net immigration was from outside the EU. What is she going to do when we leave the EU that will be so very different from what she didn’t do earlier? She didn’t have any ideas then apart from echoing the foolish claim that net immigration could be got down to 10,000 per annum. A post on the Tax Justice Network blog by Richard Murphy (see: http://tinyurl.com/z5pnsdn) shows how difficult this is going to be in one extremely narrow area of the NHS requirements, the provision of trained doctors.

All Theresa May’s claims that the Tories are the party of social justice are simply a fraud. The health service is in a terrifying tailspin. Mental-health provision is covered by just over 10% of the NHS budget although it accounts for nearly 25% of the NHS care burden. It is not subject to all the targets and goals of the clinical part of the NHS so it is easy to be cut and cut and cut. Once upon a time the Tories claimed that the NHS “is safe in our hands”. Nothing could be further from the truth.

Many of today’s announcement of mental health service initiatives will have to be implemented by schools and GPs without any extra funding, of course. Schools are already under incredible pressure and teachers simply cannot find the time and energy to make success of her plans. More funds are needed in so many areas but the only funding that is going to be made available is to big businesses by reductions in corporation tax. The Tories under Theresa May are now exposed as being the party of grotesque social injustices, increasing the inequalities that blight our community.

We Brits are happy to go along with the belief that there is a cunning plan, Baldrick like, that will take us to the promised land. On the evidence so far there isn’t even a cunning plan. The Prime Minister’s new clothes are simply a figment of the media’s imagination. This is why it needs to be said loud and clear. She is showing all the signs of being a very plausible Prime Minister but living in a land of fantasy, stark naked.