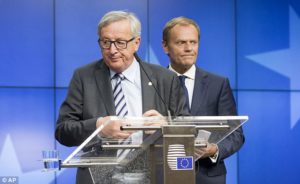 Summary: The government are being told by their ambassador to the EU what has been obvious for some time: the route towards Brexit is much more complicated and fraught than most of the public and much of the media realise. Negotiations are notionally with the EU but in fact with 27 separate nation states. Each has its own view on Brexit and the future of the EU. The political landscape across Europe is changing and the UK will be faced with negotiating with a rapidly changing EU. Many key countries face significant internal political upheavals. The probability is that only a hard-Brexit is possible in the time available. The economic damage caused by the threat of Brexit will become even more obvious to UK citizens as time goes on. Clamours for a second referendum will become irresistible.

There is increasing evidence that the whole Brexit Fraud is unravelling. The vote was one when the public were presented with a series of implausible lies that the Brexiteers packaged convincingly to fool the public. Now the British ambassador to the European Union is reporting that the widespread view within Europe is that negotiations for a trade deal could take up to a decade. The bland assurances of the government and the Brexiteers that this can be handled comfortably within a two-year window are patently nonsense. Sir Ivan Rogers report makes the greatest of sense.

There are other signs of the Brexit fraud unravelling from the government itself. Number 10 is adamant that everything is going swimmingly. Their approach is very much cast off the ship and we will start the engines later. Any sailor will tell you how foolish such an approach will be. The Chancellor, Philip Hammond, said earlier this week that all thoughtful politicians were clearly in favour of striking a transitional deal with the EU. David Davis, the Brexit Secretary, now appears to be in favour of a transitional deal. Even the hard-core Brexiteers, all wealthy and unlikely to be affected by any Brexit themselves are going rather quiet. Brexit has fallen write down the running order on the main pro-Brexit right-wing newspapers.

What do those who want to Remain in the EU, like the author of this piece, do about all this? Probably sit tight and wait for the unravelling to continue and indeed it will accelerate. Within a couple of years the economic effect of threatening to leave the EU will become more apparent in terms of significantly rising prices probably combined with a small drop in employment. We will also see the substantial cuts to benefits and public services already forced on the government to compensate for the costs of leaving. The great majority of the population will feel a marked tightening of the belt and a realisation that things are going pretty badly for most people. It is unlikely the government could go ahead with a hard-Brexit, resorting to WTO trade rules without a general election or a second referendum.

The Leave campaign are adamant that a second referendum should not be held. They realise the lies they told about the EU-free paradise we were heading towards are already unravelling. They are concerned that if another was held they might well lose it. That risk will increase in the future as the whole fraud of the Brexit case is exposed. However, if there is a significant popular opinion against a hard-Brexit that second referendum might become irresistible.

That would hopefully conclude this whole sorry business. A major distraction for the UK (and for the EU), for no productive benefit, delaying the return to real growth in the standard of living for the vast majority of citizens here. Labour are showing no sign of engaging with this seriously. We all rather wonder what they think.